A lot has happened on the homestead.

If you have been following us, you are aware that we started our homestead at the beginning of 2018 with four Buff Orpington chicks adding nine more in February. We build a temporary shelter for the chicks outside and boy have they grown. We lost three along the way leaving us with ten and they are looking good. We are excited to save money on chicken from the store, but that is still a ways off. In about two months we should see some eggs.

Also, if you have been following, you are aware that we purchased a breeding pair of American Chinchilla rabbits in February. The doe rabbit was pregnant and gave birth to a litter of nine bunnies. If you are interested in purchasing a bunny, we have five left from that litter. See our merchandise page for more information.

On top of that set of rabbits, we are housing another breeding pair of American Chinchilla rabbits and a Silver Fox rabbit. The Silver Fox gave birth to a litter of eight, and the American Chinchilla doe gave birth to a litter of seven, four weeks ago. Those sets will be ready for sale in another week. Check out the photos in the widget to the right, as well as other photos on Facebook and Instagram.

Additionally, we decided to rebreed our breeding pair of rabbits in March and Stephie gave birth two weeks ago to a litter of six. All the rabbits are so sweet and cuddly. Click the Facebook tab to see more photos and videos of the rabbits.

If you have been following, another animal on the farm you are familiar with is Willy. We got him in February just after the first set of bunnies arrived. He is a polled Nigerian dwarf male goat. We have videos of him on our YouTube page. We got Patches in March along with a second doe Nigerian dwarf goat that sadly did not survive the first night we brought her home. Patches is a mate for Willy.

Recently we purchased two more polled Nigerian dwarf goats, one male, and one female. You can read and see more about them on Facebook, Instagram and in the widget to the right. 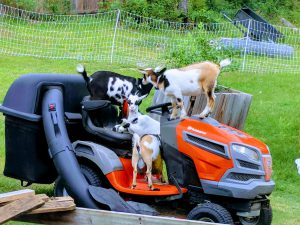 What to see more cute pictures?